So you are thinking of the best outcome before you open your mouth. It is a start. It is a step along the way.

However, you need something to think with. Assertivity is reliant on the ability to predict outcomes. Prediction comes from knowledge and theoretical understanding of the world. The more you know and understand, the better the predictions become.

A part of the morality of Assertivity is the thirst for objective knowledge and understanding of how the world really works. A thirst for knowledge is part and parcel of the assertive mindset as is its rational and objective application to the real world.

So assertivity is not something that can be turned on and off. It must be lived wholeheartedly. It cannot be turned on in front of one patient and forgotten about in between. It is intrinsically linked to the acquisitioin of knowledge in between.

Learning Rigid Assertivity is the first essential step along the way to the wonders of higher Assertivity. It is a necessary stage to pass through in that process. Its purpose is to erase tendencies towards passive aggressivity before moving onwards.

This is the playground in which the personal culture of objectivity is learned before things get far more complicated. And it is the world of empirical science where everything is relatively easily known and predictable. Outcomes are hard and predictable. Subjective evidence of human perception and feeling is too complex just for now.

It is a means and not an end. It is a personal cultural prepration for objectively delaing with the far more difficult completeness of humanity that includes the psychology of emotions.

The hope is that the best hard outcome will automatically produce the best emotional outcome in the end.

Cure the patient of the disease and they will be happy. It is simplistic but not too far from the truth.

In a Utopian Medical Education world, this stage would be completed during the education of the medical sciences. The student becomes Rigidly Assertive based on scientific theories and hard evidence. Passive aggressivity has been erased and decision making is entirely rational, made on the basis of hard scientific knowledge in a protected academic environment before facing the more complex challenges of the real world and complete human beings. Then once the student goes onto the wards they move to the next step of assertivity using their objective personal culture as a foundation for dealing with psychology and emotions.

And this is where things go wrong. Academic medicine is in power, especially in medical schools and teaching hospitals. It is top of the tree when culturally, empirical science is only half way up the tree of personal development. It is a means to an end not an end in itself.

The indoctrinated belief that the Rigidly Assertive Mindset of academic medicine and empirical science represents a major block to personal development and doctor patient relationships. It leads to Rigidly Assertive communication, communication that is always assertive and just keeps using the same strategy over and over again even though it does not work.

The Rigidly Assertive are just as closed minded as the aggressives and passives about the completeness of their worldview. They do not know how those from other mindsets think. They cannot see the world from their angle. Their worldviews are based on different morality and thinking processes.

The morality of the Rigidly Assertive is that the empirical sciences, logic, rationality and statistics are all important and everything. They are thinking right and everybody else is thinking wrong just as a passive aggressive calls a person who considers the predictable hard outcomes as cold, inhuman and immoral. To the Rigidly Assertive, passive aggressives are dangerously subjective and unrealistic and incomprehensible.

This is where the communication breakdown occurs. The use and meaning of language is even different. The Rigid Assertive chooses their words carefully with well defined meaning. The listener is judging those words on whether they sound good in either a moral sense or whether they sound impenetrably intelligent.

If a passive aggressive does not understand the science or statistics of what is being said, they assume that the Rigidly Assertive person is using language as a passive aggressive weapon rather than attempting to communicate really important knowledge for the other to make a rational and informed decision.

They can go passive, assuming their place in the hierarchy, even looking up adoringly to seek favor and please the speaker. However, remember that those of a passive and ingratiating mindset will do exactly the same to the next person. They will sit and nod adoringly in their face and it has no connection with their future actions.

Or they can turn intimidated, resentful and turn aggressive because in their worldview, when somebody does this they are trying to con another person into an decision that does not consider them.

So the aggressive person goes seeking the Lose/Win salesperson to massage their ego and tell them what they want to hear.

People from each mindset judge others and their own communication on their own morality. Passive aggressives do not communicate to share information for decision making purposes and they are entirely blind to the concept that anybody else would do this. They communicate to confirm status, be popular or manipulate obedience.

And because the learning of their mindset works predominantly through immediate personal experience rather than theoretical predictions and evidence, they have no idea at all, no feeling for presented statistics. The concept is alien. Again, they do not understand so they think somebody is using language as a weapon against them.

The first rule must be the conscious and proactive use of plain English that the patient can understand at their level of education. Remember that even percentages confused some students at school. They may be frightened of numbers.

As soon as the recipient does not understand, the patient doctor communication and trust has been broken. It may not appear so at the time according to the adoration in their eyes but behind that, the passive aggressive will feel that language has been used as a weapon against them. 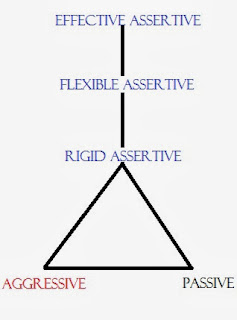